This Week's Wanna Read: Between the World and Me by Ta-Nehisi Coates 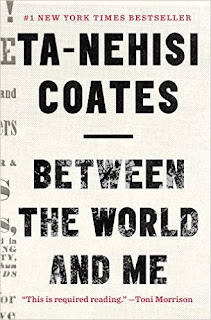 This book is so hot right now. People who haven't read it are talking about it, that's how hot, how relevant, how urgent, how beautifully written this book is. I'm here talking about it, like I did in that previous sentence, and I haven't read it. For now, I'm accepting that I will find the book to meet all of those adjectives, because the consensus is just that strong.

If Toni Morrison agrees to endorse your book and describes it as "required reading"--then refers to the writer as the successor to James Baldwin--it's going to gain a lot of attention.

I found some interesting, lesser-read reviews online, including one from the blog "The Christian Century." The writer is a Christian, and speaks against the comments of religious people who have derided the book because they find Coates' atheism an insurmountable obstacle to engaging with his message:


And yet, as a religious person reading Between the World and Me, I find his words to be deeply insightful and helpful for thinking not only about race, society, and U.S. history, but about the relationship faith has within that nexus... [p]lease read the book.


The review also refers to Coates' message as "social gospel," which I find heartening and fascinating. This person of faith has found language to describe his own experience of the book; instead of forcing his worldview onto the text--which would almost certainly find it lacking, at least because of Coates' atheism--he finds a way into the book's message and dwells within its pain and pessimism without feeling his faith has been diminished for doing so. He encourages other Christians to do the same, ending his review by expressing a clear connection between religious people and Coates' social gospel:


For those thinking theologically about America’s social architecture, his words are a much needed challenge. With his atheism concerning many of America’s Gods, Coates may be surprised to find some religious allies.

The Guardian writes that Coates' perspective might be described as "post-cynical," which interests me. Is it like all the other "posts" we have, like post-feminist or post-modernist, in that we detect a shift in cultural awareness but can't think of a name for it yet? And does pessimism equal cynicism? And does an intellectual perspective require cynicism, or at least it did? Is part of what drives this book's necessity its resistance to categorization?
at August 07, 2015